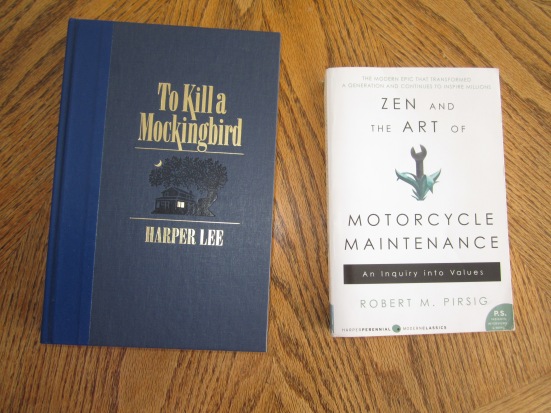 No one even tried to guess the books on my list for last month’s contest.  I’m disappointed in you.

Well, what do you think of them? How many have you read?  Are any of your favorites on the list?

At the bottom of this post I have listed a few more that have come to mind…if I expanded the list to maybe the 50 best sellers.

Some of these titles are very hard to find (or once were, like Infinite Jest).  Some are regularly on the shelves because we hunt for them with dedication.

I find it funny that Zen and the Art of Motorcycle Maintenance was rejected by publishers 126 times and has now sold over 5 million copies.

Even Harry Potter was rejected by foolish publishers who apparently couldn’t recognize a winner when they had it in their hands.  I remember being about three pages in the first Harry Potter book and being so in awe I compared it to Charlotte’s Web.

Zen and the Art of Motorcycle Maintenance – Robert Pirsig

To Kill a Mockingbird – Harper Lee

On the Road – Jack Kerouac

How to Win Friends and Influence People – Dale Carnegie

A People’s History of the United States – Howard Zinn

Slaughterhouse Five – Kurt Vonnegut (and others by Vonnegut)

anything by C. S. Lewis

anything by Edward Abbey

anything by Stephen King

anything by William S. Burroughs

anything by Charles Bukowski

anything by Hunter S. Thompson

The Devil in the White City – Erik Larson

I think I should add these to this list, and now we’ve topped 50:

Jane Eyre and others by Charlotte Bronte

Pride and Prejudice and others by Jane Austen

A Tree Grows in Brooklyn by Betty Smith

The Outlander series by Diana Gabaldon

The Wheel of Time series by Robert Jordan

The Princess Bride by William Goldman

The Art of War by Sun Tzu

The Prophet by Kahlil Gibran

The Giving Tree by Shel Silverstein